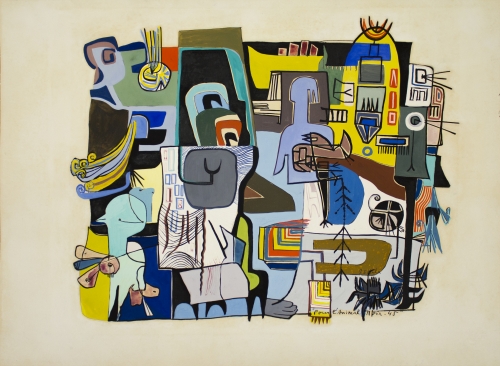 Sarah Lawrence alumna Sonja Sekula (1918-1963), whose tremendous talent as an artist did not prevent her from fading into obscurity, will be one of 11 female Abstract Expressionists to be featured in a Katonah Museum of Art exhibit this fall.

Titled Sparkling Amazons: Abstract Expressionist Women of the 9th St. Show, the exhibit will present 32 works by women artists who were part of the 1951 “9th Street Show” in New York, which the museum describes as “a pivotal moment for the emergence and acceptance of Abstract Expressionism.” The exhibit opens on October 6 and will run through January 26, 2020.

Included will be seven paintings by Sekula along with pieces by contemporaries including Helen Frankenthaler, Lee Krasner, Joan Mitchell, Elaine de Kooning, and Grace Hartigan. These prominent artists are the subjects of Ninth Street Women, a book by Mary Gabriel, whose publication by Little, Brown and Company last year coincided with the planning of the Katonah exhibit. This is the first time works by the female 9th Street artists will be brought together since the original groundbreaking exhibit 68 years ago.

Curator Michele Wije came up with the idea for the show while considering exhibits that have changed the course of art history. “The 9th Street Show was one of those,” she said. “I thought it would be interesting to focus on the women artists from 9th Street because Abstract Expressionism was always a very male-centered story.”

The 9th Street Show was assembled by artists of what came to be known as the “New York School” who were frustrated by the lack of attention and respect they received from the city’s art scene. Curated by the now renowned gallerist Leo Castelli and located in an abandoned East Village storefront, the show featured works by 70 artists, almost all of them men, some of whom would go on to achieve legendary status, such as Willem de Kooning, Jackson Pollock, and Franz Kline.

Wije said there were many women artists who were part of the “artistic fabric” of the expressionist movement, but their contributions have generally been under acknowledged if not completely overlooked. “Women have kind of been elided from art history. Now is the moment that we’re bringing them back,” she said. “The 9th Street Show was the catalyst to show that women artists were as productive as their male counterparts.”

Creating a chronological span of the artists’ work through the 1950s, Wije has made it possible to follow their stylistic evolution and maturation during that important decade of American art history. “Many of these artists, like Lee Krasner, Helen Frankenthaler, Joan Mitchell, went on to have incredible careers,” she said. “But others, like Sonja Sekula, kind of disappeared.”

There have been only three U.S. exhibits devoted to Sekula’s work since her death, though she has achieved some fame in her native Switzerland. Still, her contributions to Abstract Expressionism have remained largely unsung and her compelling life story is unknown to most.

Born in Switzerland in 1918, Sekula relocated to New York with her parents in 1936 and enrolled at Sarah Lawrence the following year. According to a timeline created by family members, she studied philosophy and literature with poet Horace Gregory, and painting with Kurt Roesch. Following a summer trip to Europe with her parents, Sekula suffered a mental breakdown, launching a lifelong battle with mental illness. She was hospitalized in White Plains and her parents moved to Scarsdale and then to Westport, Connecticut.

Upon release from the hospital, Sekula studied at the Art Students League in New York with Morris Kantor and moved back to Manhattan with her parents when she was 24. She was soon immersed in the city’s avant garde arts world; her social circle included André Breton, Frida Kahlo, Max Ernst, Jackson Pollock, Robert Motherwell, and David Hare, and after moving downtown on her own, she lived in the same Monroe Street building as John Cage and Merce Cunningham, who became
friends.

Sekula began achieving success at age 25 with a series of exhibitions, including solo shows at Peggy Guggenheim’s Art of the Century Gallery and at the Betty Parsons Gallery, where she continued to show until 1957. Reviews in both America and at shows in Europe were enthusiastic, with one reviewer describing her as “an abstract Paganini.”

“She really comes out of the European tradition of surrealism,” said Wije. “What’s interesting to me about these artists we’ve pulled together is that the ones who had European connections are much more entrenched in European art forms. I would characterize her work as coming out of the surrealist tradition. It’s also very quirky—each piece is so different. There’s no stylistic continuity with her, which could speak to her biographical situation.”

Sekula’s friend, composer Morton Feldman, later said, “She was unusually gifted; her work had conviction, an authenticity that made you wonder who this person is and what is going to happen to all this talent.''

Sadly, Sekula’s mental illness persisted and she was repeatedly hospitalized. “What’s really unfortunate about her life is that it seems she suffered from either bipolar disorder or schizophrenia, and today could have been treated with medication,” said Wije.

In addition, Sekula was an out lesbian at a time when being so could be perilous. As reported by her biographer for the glbtq Encyclopedia, she was subjected to conversion therapy, as her lesbianism was seen as a “debilitating manifestation of schizophrenia” and she endured “shock therapy, injections with various mind-altering drugs, and wet-sheet wraps.”

In a wearily poignant entry in Sekula’s diary in 1960, she wrote: "Let homosexuality be forgiven . . . for most often she did not sin against nature but tried to be true to the law of her own—to feel guilt about having loved a being of your own kind, body and soul, is hopeless." The entry suggests she was well familiar with the idea of “sinning against nature.”

However, despite the difficulties she endured, Sekula produced an impressive catalog of paintings, and was also a prolific poet. Some of her largest works reside with the Museum of Modern Art, but, as it was closed for renovations during the last year, the works were unavailable to the Katonah exhibit. Nevertheless, Wije acquired a rich sampling of Sekula pieces in a variety of mediums including ink and watercolor, ink and gouache, oil, mixed media, and watercolor.

“She had a very keen sense of color,” said Wije. “If you’re good at watercolor or gouache and you’re a good colorist, that’s a wonderful combination.”

Sonja Sekula never achieved the recognition that she sought for her work. In 1961, she wrote: "No more reading of art magazines . . . I am as good as bad as all of them, even though I am ignored . . . I go on." Two years later, she committed suicide, at age 45. Still, the 21st century may yet come to recognize her unique talent and contribution to Abstract Expressionism, and the Katonah Museum of Art exhibit provides a fresh step in that direction.