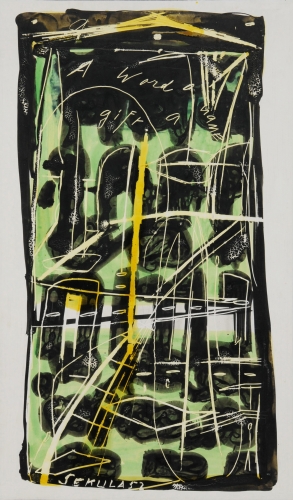 KATONAH, New York — The Ninth Street Show in 1951 is among the more enduring of the origin stories about New York’s postwar art scene, uniting the theme of artist solidarity to the ideal that art can be a vocation unsullied by money and fame.

As the story goes, painter Jean Steubing, working on behalf of her obscure New York artist-peers, secured gallery space in a vacated storefront on East Ninth Street near Broadway. The resulting exhibition was curated by Leo Castelli with substantial input from artists, around 60 of whom were included in the hastily assembled roster. History — or legend — holds that the show was a breakthrough. Museum curators and uptown collectors attended and began to acquire this brave new art. Art reviewers noticed, too. And as the 1950s progressed, New York surpassed Paris as the art-making capital of the world.

In reality, the tale of the Ninth Street Show did not end quite happily ever after. Only a handful of the Ninth Street artists gained increased recognition from it. Even fewer saw any sales. Still, postwar New York accommodated these artists who, for the most part, operated without institutional affiliations. In the 1950s, a downtown loft could be rented for about $30 a month — the equivalent of about $400 in today’s money. So most Ninth Street artists soldiered on in obscurity, getting by through shitty day jobs or family money while finding morale boosts and genuine recognition through their own cooperative galleries. Many finally left the city. Some, like Steubing herself, abandoned art-making entirely.

Another messy fact is that The Ninth Street Show reflected the era’s sexism. Archival evidence indicates that only about 11 women were included. Sparkling Amazons: Abstract Expressionist Women of the 9th St. Show at the Katonah Museum of Art revisits these 11 artists.

As one of many current retrospectives about postwar American women artists, this exhibition rounds out the art historical record even as it undercuts the artists’ long-professed desire to be recognized for their art rather than for their status as women. Still, this new, extended spotlight has been a long time coming. By the mid-1970s, critic Thomas Hess acknowledged the critical favoritism shown to postwar male artists
when he singled out the Ninth Street women as “sparkling Amazons,” a jarring choice of words that perpetuates the chauvinism it aims to debunk.

Reservations about Hess’s diction aside, the exhibition of 32 works, curated by Michele Wije, also includes period photographs, artist statements, and explanatory wall charts. The sharply focused show is cinematic and intimate. While the featured works vary greatly in scale and tone, the exhibition succeeds through its inbuilt polyphonic variation.

Rounding out the famous five is Grace Hartigan, whose abstractions frequently  integrate figuration and still life, confounding art criticism’s norms about stylistic purity. On Ninth Street, such shape-shifting overrode careerist strategies. And these painters did without Artist Statements saddled with theory and buzzwords. Self-branding seemed pointless. Of all these eclectic artists, only Mitchell and Frankenthaler developed a signature style.

And no single figure personifies this New and Old World hybridity more than Sonja Sekula, the Swiss-born poet and painter whose art converts subconscious Surrealist imagery into meticulous formal compositions. Highly regarded by fellow European émigré artists and American peers in the Coenties Slip neighborhood, Sekula found her momentum interrupted by a mental illness that led to frequent institutionalization; this lifelong struggle culminated in her suicide in 1963.

Although biographers characterize Sekula as an unhinged savant, her work reflects discipline and acumen that make her firepower all the more unnerving. Her spectral painting “7 Am” (1948-49) remodels everyday city exteriors and amplifies their nightmarish peculiarities. The gray skylines, building facades, and scaffolding form an underlying grid upon which Sekula orchestrates percolating dramas. The painting’s muted colors and dissolving forms meet clarifying lines as a dreamscape emerges through a thrilling, imaginative cartography.

Sekula conveys such magnitudes even in small-scale works. In “A Word, a Name, a Gift” (1952) green arches and brickwork form a fragmented building facade. Openings within the structure’s stories form a kind of punctuation while pale yellows and black lines glide vertically down the picture plane suggesting Sekula as poet voicing her utterances within the silent domain of paint.

Like Ryan, Perle Fine harnessed the allover, gestural liberties in Abstract Expressionism to create and then further explore transitional states of being as well as precipitous, shifting moods. Fine’s liquescent, luminous color washes in “Untitled" (1951), from her breakthrough Prescience series, feature pinks, grays, and yellows in which pictographic and calligraphic forms materialize, seeming to float in and out of the picture plane like half-formed apprehensions coasting through the subconscious.

Fine was enjoying peak critical acclaim at the time of the Ninth Street Show and her experience before and after it encapsulates what a mixed blessing the era was. Despite the positive notices, she was dropped by the Betty Parsons Gallery in 1954. In response, she left the city and set up a home studio in Springs on Eastern Long Island, where she continued to make transformative art for many decades. Of her dedication, her friend and neighbor in Springs declared that “Perle never let anything interfere with her art! Never!”

In hindsight, maybe a few things did impede. After all, the culture in which these Ninth Street artists created their art effortlessly ignored it, and women’s art was considered less valuable than men’s. So it was then, so it is now. And today American art remains further imperiled by its absurd, inflated commodification, by the banal ideological agendas of cultural institutions, and of course by a deep-seated general neglect of its real meanings. By taking up painting as a personal obsession and vocation that provide its own inherent incentives and rewards, these artists remind us about the deep pleasures and high cost of independence. And, rather urgently, their lives and works embody the countercultural power that can flow from all serious art.