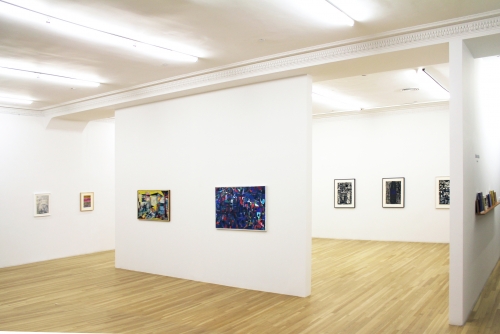 "Everyone from the fifties in New York has Sonja Sekula story," Brian O'Doherty wrote in 1971, "yet, though she contributed to period mythology, she herself as no myth." Sonja Sekula: A Survey, the first New York solo exhibition of the artist's work in more than twenty years, begins to construct one after decades of relative obscurity.

The daughter of Hungarian philatelist and a Swiss confectionery heiress, Sekula was born into wealth and privilege in Lucerne, Switzerland, in 1918, moving to New York when she was eighteen. In the 1940s, she showed with Betty Parsons and Peggy Guggenheim and became involved with the circle of exiled Surrealists around André Breton, with whom she briefly shared and apartment on West Fifty-Sixth Street. Her friends incldued Roberto Matta, Marcel Duchamp, and Max Ernst, as well as abstract expressionists Jackson Pollock, Robert Motherwell, and Mark Rothko.

Sekula's paintings from the 1940s and early '50s capture the atelic and experimental quality of this transitional period in American modernism, flowing from geometric to biomorphic abstraction to automatic writing and gestural painting. The earliest work in the show, Untitled, 1942 -  a sherbet-colored diaphane with runes and wedges variously resembling arrows, propellers, and light beams -  loosely recalls the cosmic landscapes of Matta and Alice Rahon, the French-Mexican Surrealist painter with whom Sekula would fall in love in 1945.

"I shall be an American painter," Sekula wrote to her mother in 1947. "When I paint bridges I believe to also add in symbols towards the peace and welfare of the universal future!" A decande and several psychotic breaks later, this period optimism had soured, and Sekula's art and life turned ever more inward. "I do not feel part of any country or race," she wrote in 1957 from Switzerland, where she worked in increasing isolation between stints in sanatoriums before taking her own life in 1963. With its selection of small, but capacious paintings on cardboard from the late '50s, the exhibition made a strong case for this later period, often considered an epilogue to Sekula's more significant New York years. In Untitled, 1958, and irregular grille of reticulated black lines yields to a thick, cloven gash that doubles as void and volume, at once suggestive of inky depths and megalithic structures. The same year, Sekula made Portrait, scratching a fugitive female figure with a tree-trunk neck and pendulous breasts into a midnight-blue ground, revealing cerulean underpainting. This negative, wilfully paleo method of mark-making recalls the art brut of Jean Dubuffet, whom Sekula has met in Paris the previous year. In several gestural works on paper from 1961, Sekula blotted the white ground with improvisatory stains, spatters, and skeins of paint in a palette restricted to black, blue, and red. A standout from this group was the exuberantly decorative Ethnique, 1961, with its densely encrusted surface of churning arabesques and calligraphic marks.

A vitrine displayed photographs of Sekula painting in Breton's apartment, at a party for Aimé Césaire, by Frida Kahlo's sickbed, and with John Cage and Merce Cunningham in the downtown loft the three shared in 1947. As encountered here, the sepia-toned glamour and tragedy or Sekula's life - the bohemian din of the Surrealist diaspora and the New York School; her marginal position as a queer, mad, suicidal outsider - invited undeniable sympathy and fascination, raising thorny debates about biography in feminist and queer art history. Do presentations such as these risk constructing a "myth of her neglect," as O'Doherty cautioned, thus overwhelming the artist's mercuria, intimately scaled paintings themselves? Measured against the returns of reading Sekula's art with and against the grain of her equaly extraordinary and troubled life, the risk is well worth it.