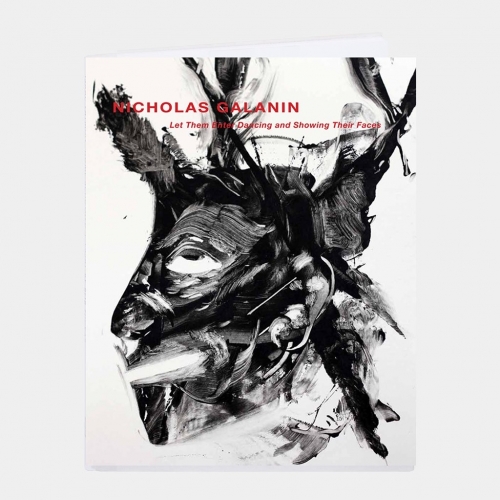 Cover of NICHOLAS GALANIN: Let Them Enter Dancing and Showing Their Faces, 2018

“Like the ocean, the expanse of Galanin’s work is vast, and in the midst of it, far from a shoreline, limited ability to perceive the movement of multiple currents could convince viewers they are in quite a different location than they are. That he is able to create points of access to his work so broadly is what allows for this possibility, and part of what attracts people to his work from so many directions.”

—Merritt Johnson, from the Introduction

This publication spans the multiple generations and forms of media that inform Nicholas Galanin’s “vessels of knowledge, culture and technology—inherently political, generous, unflinching, and poetic.” He creates and speaks through multiple visual, audible, and tactile languages, a practice succinctly articulated through the introduction by artist Merritt Johnson, and further explored in conversation and critical analysis through an artist interview with scholar Negarra A. Kudumu.

Galanin’s practice includes numerous collaborations, including with his brother and fellow artist Jerrod Galanin under the moniker Leonard Getinthecar, through his participation in two artist collectives, Black Constellation, and Winter Count, and with  fellow band members Otis Calvin III and Zak Dylan Wass of Indian Agent.

Through two- and three-dimensional works and time-based media, Galanin encourages reflection on cultural amnesia that actively obscures collective memory and acquisition of knowledge. Galanin’s work has been exhibited extensively nationally and internationally, including at the Sydney Biennale, 2020, Australia; the Whitney Biennial, 2019, New York; and through a solo exhibition in Minneapolis in 2019. He was named a 2020 Artist Fellow of the Open Society Foundation.

This is a revised edition of his first monograph.

NICHOLAS GALANIN/YéIL YA-TSEEN (b. 1979, Sitka, Alaska) is a Tlingit/ Unangax/multi-disciplinary artist. His works are in over twenty museum collections including the Vancouver Art Gallery, British Columbia; the Peabody Essex Museum, Salem, Massachusetts; the National Museum of the American Indian, New York; the Museum of Fine Arts Houston; the Portland Museum of Art; and the Humboldt Forum, Berlin; among many others. Galanin has apprenticed with master carvers and jewelers. He earned his BFA at London Guildhall University in Jewelry Design, and his MFA in Indigenous Visual Arts at Massey University in New Zealand.

MERRITT JOHNSON (b. 1977, West Baltimore, Maryland) spent her childhood navigating between trees, tarps and concrete. A multidisciplinary artist, Johnson exhibits, performs, speaks and writes independently and collaboratively. For over a decade, her work has navigated spaces between bodies and the body politic, land and culture, by making reflectors, refractors, and vision shifters to look at and through puddles of blood and oil, plastic tarps, chainlink fences, cloud cover, tree lines, clear cuts, bone, skin and hair.

Johnson earned her BFA from Carnegie Mellon University in 2003, and her MFA from Massachusetts College of Art in 2005. She is part of the artist collectives Winter Count, and XCIX.

Negarra A. Kudumu (b. 1979, Chicago, Illinois) is a scholar and intellectual provocateur; since 2013 she has been the manager of adult public programs at Frye Art Museum in Seattle, WA. Her practice is situated squarely within the domain of cultural production and consumption, investigating the ways in which these processes are expressed through language. Her intellectual interests reside at the intersections of contemporary art, curation and critical theory with a specific interest in the contemporary visual culture of the African continent, Iran, South Asia, and their respective diasporas.