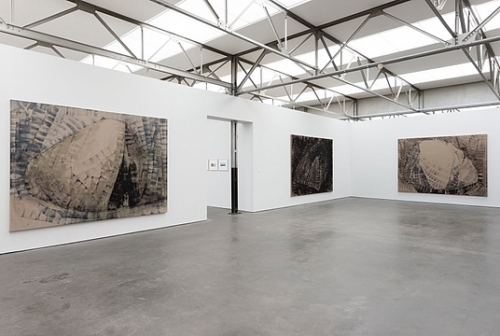 For the first time, Robert Zandvliet is showing a lesser known side of his work: a selection from hundreds of drawings and sketches made in preparation for series or single canvases. Because of his uncompromising method in the ultimate painting, it is important for him to figure out beforehand exactly how the composition should be: 'I make sure that I'm aware of how the image should take shape on the canvas. Then I produce a whole lot of sketches, and after that I paint it two or three times so that I get a complete physical sense of it.' On the basis of a framework that corresponds to the painting that he envisages, the painter seeks, in the works on paper, solutions to questions such as: How can a certain coherence be achieved in the landscape? What happens if the brushwork becomes broader? Where should those lighter areas appear in the image? By working on a smaller scale, he is able to discern the construction of the painting. 'The sketches can be regarded as the blueprints for the paintings that develop. They allow me to figure out rather quickly what can go wrong.'

Last year Zandvliet decided to exhibit a selection of those drawings and to publish them in the form of a book. During the process of sorting through the hundreds of works on paper, he noticed that various series emerged. The title of a show that he worked on, such as the 2008 exhibition Rückblick held in Basel, can sometimes be the connecting thread in a series of sketches. On the other hand the series Linea, Schrift and Zigzag relate to the form or gesture. The series Am Genfersee includes sketches in which he explored the rhythm and the repetition of colors and planes that can be found in Ferdinand Hodler's painting from 1909 which has this title. But also consistent with that series, being a similar type of lake landscape with a rhythmic quality, is a sketch inspired by J.M.W. Turner's watercolor Funeral at Home from 1841.

For those who are familiar with the paintings of Robert Zandvliet, seeing the series of drawings will mainly be a new encounter with old friends such as the movie screens, the highways, seascapes, moonscapes, Van Gogh's path into the wheatfield and Picasso's studio. Those recognizable periods and motifs from his oeuvre also appear in One Hundred Views, a sketch measuring twenty-four meters in width, which Zandvliet will carry out directly onto the wall. As the artist himself describes it: 'a sketch the size of a painting'.

The selection of the drawings made 2013 a year of looking back for the painter. Before this he had spent several years working on a series of paintings taken from the old masters. That period was brought to an end with a publication and the exhibition I Owe You the Truth in Painting, held at GEM in The Hague. The investigation of well-known predecessors, and the formal solutions that he encountered in their work, enabled Zandvliet to continue expanding his repertory of skills without actually losing touch with his own painterly handwriting. But a further quest for new compositional solutions in paintings, according to this approach, struck him as being a dead end. He could have kept on producing countless works in this manner, but the acquired control of the work process also presented a danger: 'At that point they simply become nice paintings.

As a painter Zandvliet immediately admits that color, form and composition are important factors—ultimately these are what we first perceive in a painting. But he realizes more and more that something else is needed. Something that turns a good painting into a work of art. He himself describes this as 'the energy of a painting', but it might also be called the soul. Having left the old masters behind, he now seeks the challenge in something that appears to be fairly simple at first: the painting of a stone. It's easy to assume that the artist is consequently reverting to the type of work with which he made his debut in the 1990s, involving the depiction of a plain object on a monochrome background. Nothing could be further from the truth however. Now the point of departure is not only the form of the stone, which would in itself attest to a degree of courage due to the formless character of an ordinary stone. No, Zandvliet is striving to create paintings in which everything comes together—subject, form, color and composition—and the anecdote, the temporal, fades into the background. He's looking for a 'soul' in the painting, which he happens to find in a piece of stone: 'Whether the stone is beautiful or ugly is beside the point. What matters is the self-evident quality and a kind of compressed energy that is characteristic of a stone.'

The works on paper show the course of Zandvliet's development since the 1990s: a search for pure form and clear compositional solutions. In that respect the exhibition can be regarded as a retrospective. In the wall-sized sketch he sums it all up once again, and then moves on. For with the series Seven Stones—which can already be considered a milestone in his body of work—Zandvliet has taken a new road. Having sought form in the past, he is now much more concerned with the reason why a form affects him so profoundly.

Link to De Pont Museum
Back To Top