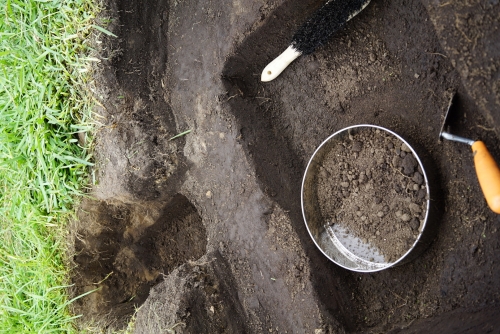 Nicholas Galanin Shadown on the Land, an Excavation and Bush Burial, part of the Biennale of Sydney exhibit on Cockatoo Island, Australia.

In St. Paul, Minnesota, leaders from the American Indian Movement of the Twin-Cities orchestrated and helped in the toppling of a Christopher Columbus statue on the state capitol grounds.

Videos of the event went viral, and helped initiate a conversation about what statues of Confederate war figures, as well as Columbus and others mean today.

In Alaska, the names of settlers and explorers can be found everywhere -- roads, cities and buildings and statues. All reminders of Alaska’s colonization and the impact it has had on the Indigenous population.

"Take them all down," said Yéil Ya-Tseen Nicholas Galanin, who is a Tlingit and Unangax̂ musician and artist working mostly out of Sitka, Alaska.

He’s talking specifically about statues. But Galanin’s art – often speaks to the traumatic history that Alaska Native and other Indigenous people have to face every day.

One of his most popular pieces is a polar bear rug that looks like it’s come partially alive, and could attack at any given moment.

Before the coronavirus pandemic gripped the world, Galanin was working on a piece for an international festival of art – called the Biennale of Sydney, Australia. Galanin’s piece is called the "Shadow on the Land, an Excavation and Bush Burial."

His piece is on Cockatoo Island in the Sydney Harbor.  The perfect silhouette outline of a Captain Cook statue can be seen dug out of the earth. The exhibit looks  like an excavation site, complete with roped off areas and piles of dirt.

"It's an archeological dig of the shadow of the Captain Cook statue in Hyde Park and Sydney," Galanin said. "I was just discussing this with my partner this morning of how this project couldn't have fallen in a more charged time.

In Alaska, Change.org petitions call for the removal of statues in at least three Alaska cities, including Galanin’s hometown of Sitka.

The land that became known as Sitka served as a base for the Russian-American Company in the early days of Russian colonization.

And since 1989, a life-size bronze statue of Alexander Baranov has sat in downtown. More than a 1,000 people have signed the petition calling for its removal.

A similar petition also calls for the removal of a statue of Captain James Cook in  Anchorage. Cook’s name can be found throughout town -- a hotel, a regional Native corporation and Tribal organizations, even the inlet that connects Alaska’s largest city to sea- and ocean-going is named after Cook.

The Dena’ina name for the area is Tikahtnu – or “big water river,” which you can also find around town, but not with the same frequency as Cook.

Aaron Leggett, who is Dena’ina Athabascan, serves as president of the Native Village of Eklutna, which sits within the Anchorage municipality.

Leggett also is the curator for Alaska history and culture at the Anchorage Museum -- and has researched a lot about Cook.

"He was a quite brilliant mariner," Legget said. "What he did is an accomplishment of human history. There's no way around that. And could somebody else have done it the way he did it? No."

Leggett said Cook was starting to learn from and recognize what great mariners the Pacific and Polynesian people were.

"Had (Cook) lived? Who knows what could have happened?"

Cook died on February 14, 1779. Native Hawaiians killed him after the explorer attempted to kidnap and ransom the Alii nui -- or king -- of Hawaii.

In Resolution Park in Anchorage, a statue of Cook overlooks the inlet. The park is named after one of Cook’s ships that he stayed on while it was moored in the inlet. Cook never technically set foot on the land that became known as Anchorage. He never left the boat.

“He sends a party from his ship, the two ships, the Resolution and the Discovery, to a tip of land on the Kenai Peninsula, today now known as Point Possession,” Leggett said. “They go on land, they plant a flag. They bury a beer bottle full of British coins. And they claim it for the crown in the name of the British Dominion or the British Empire. They have a little ceremony and they take off.”

Legget acknowledges the problems that Indigenous people have with Cook’s legacy. But he doesn’t think tearing down the statues would solve anything.

“I'm less interested in taking down statues and I'm more interested in getting funding to actually fund the place-name projects for the places that we've identified -- the 26 or so locations across the municipality. That would be much more meaningful.”

The place names project would provide signs in English and Dena’ina – for sites like the inlet and Knik Arm.

Dgheyey Kaq' or “mouth of the needle fish” is the Dena’ina name for what is now Anchorage. Dgheyaytnu – or “Stickleback Creek” – is the name for Ship Creek, the original Anchorage townsite.

“I think even if a statue comes down. He's still got Cook Inlet, you've still got Cook Inlet Regional Incorporated,” Leggett said. “I mean, we're not going to change our names tomorrow. Is that a conversation 20 years from now or what not? Maybe, you know, but these things take time.”

Leggett says it’s important to have community dialogues about these issues.

Oil company British Petroleum gifted the statue to the city of Anchorage as part of a bicentennial celebration in 1976. A similar statue is in Anchorage’s sister city, Whitby, England.

Anchorage mayor Ethan Berkowitz said during a city briefing that the future of the statue is under review. But declined to offer too many details about what that entails – simply that Black Lives Matter protests have largely been peaceful in the state and that he doesn’t expect anyone to take too rash of an action with the statue.

At a recent Sister Cities Commission meeting in Anchorage, Berkowitz says the Village of Eklutna should decide the fate of the statue.

In Alaska’s capitol seat of Juneau, a statue outside the state Legislature building depicts William H. Seward holding the Treaty of Cession – the 1867 agreement for the U.S. to purchase Alaska from Russian.

It was installed just a few years ago – as part of a privately funded project – and created by a couple Ketchikan artists.

An Alaska town also shares Seward’s name, as does a road in Juneau – in fact it runs between Sealaska Corporation, the Southeast Alaska-based regional Native corporation, and the Sealaska Heritage Institute.

The Treaty of Cession is a point in history that’s politically charged for Alaska Natives.

“As Indigenous people from Southeast Alaska and also myself personally, we have always scorned William Seward and we scorned him since the 1867 Treaty of Cession,” said Worl, who carries the Tlingit names are Yeidiklasókw and Kaaháni. “We said if you want to buy Alaska, then buy it from its rightful owners. We are the ones who own Alaska.”

A Change.org petition requesting the removal of the statue originally addressed Juneau’s mayor and city manager. But the state owns the property that the statue sits on – and so the petition has since been revised.

Worl says now is the time to have the conversation about what the statues mean.

Worl says they’ve taken some small steps in Juneau. They’ve renamed a downtown corner near the Walter Soboleff Building to Heritage Square and they’d like to have the name of Seward Street changed as well.

(Editor's note: This story has been updated to include some additional information. This story was edited with help from Rashah McChesney.)