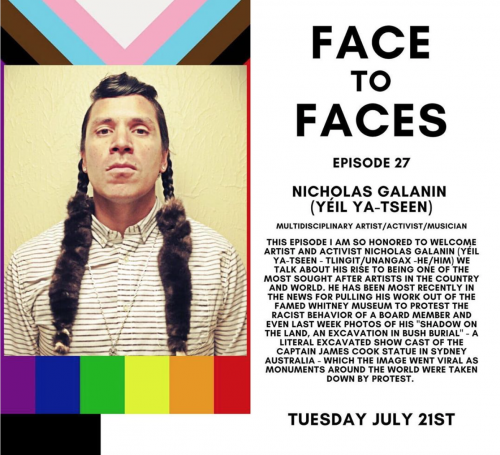 A conversation series that provides a platform focusing on the LGBTQ+ & POC communities and their allies, in the areas of activism, politics, mental health, arts & entertainment and community - where we discuss the human experience in our ever changing world. The goal of this space is to remind you, that while you may have moments where you feel isolated or alone, there is always an incredible community of people here that is safe. We all connect to people at our deepest pains and greatest joys, and in this space are here for those moments and everything in between.

Episode 27
This episode I am SO Honored to welcome artist and activist Nicholas galanin (Yéil Ya-Tseen - Tlingit/Unangax -he/him) we talk about his rise to being one of the most sought after artists in the country and world. He has been most recently in the news for pulling his work out of the famed Whitney museum to protest the racist behavior of a board member and even last week photos of his "Shadow on the Land, an excavation in bush burial" - a literal excavated show cast of the Captain James Cook statue in Sydney Australia - which the image went viral as monuments around the world were taken down by protest.