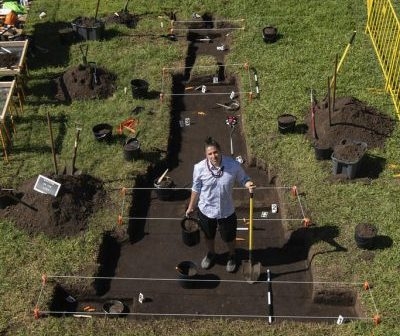 Tlingit and Unangax̂ visual artist Yéil Ya-Tseen Nicholas Galanin stands inside his earthwork piece March 13, 2020, for the Biennale of Sydney titled Shadown on the Land, an Excavation and Bush Burial, part of an exhibit on Cockatoo Island, Australia. (Photo by Rhett Wyman/SHM, courtesy Nicholas Galanin)

Amid calls to remove statues of European explorers in Alaska, including a statue of Captain James Cook in Anchorage, an Alaska Native artist’s work digging a grave for a different statue of Cook is on display in Australia.

The art installation took over a year to conceive and create, and it’s called “Shadow on the land, an excavation and bush burial,” part of Sydney’s 22nd Biennale art exhibition. It’s the work of Yeil Ya-Tseen Nicholas Galanin, a Tlingit-Unangax̂ artist from and based in Sitka.

While some would rather keep the statues up, in favor of adding context around them, Galanin and others say they are symbols of oppression and perpetuate a false, colonialist narrative and should come down. He spoke with Alaska Public Media’s Casey Grove.