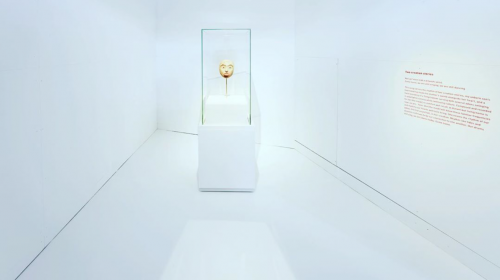 In the hearts of the city and its people for 125 years: Freiburg’s oldest museum is celebrating an anniversary – time to spill the beans and take a look behind the scenes. Experts, artists and friends introduce 125 exciting, surprising, critical, amusing or a very personal perspectives on 41 objects in the Natural history and Ethnological collection.

They focus on the eventful history of the museum or the characteristics of the: objects from ancient Egyptian beaded netting to a Japanese Buddha statue; from Hinterwald cattle via the mythical quetzal to meteorites from outer space: the unknown becomes visible; familiar things are viewed in a different light. The museum invites you to take an extraordinary journey through space and time that gives plenty of food for thought.

Statement of the artist about his work: "Two creation stories Neil gú! atool'eix_ ka at tooshí yeisú. Come home, we are still singing, we are still dancing This song carries the rhythm of two creation stories, my unborn son’s heart beating inside his mother's womb alongside her heart, and a field recording of a Tlingit totem carving with several adzes swinging in polyrhythm carving while continuing culture. Composed and recorded for her (the mask), to comfort and recall. A distant but living home is near, we are... here. She (the mask) will know these familiar frequencies and rhythms our hearts and tools bring. She knows the rhythm of our adzes, the first sound felt, in her creation. Rhythm like tides and seasons continues to be our connection to one another. Our drums still sing , we still dance today. Come home."

Link to Exhibition
Back To Top