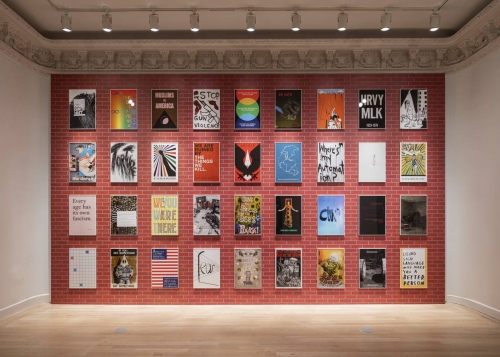 Installation view of "We Fight to Build a Free World: An Exhibition by Jonathan Horowitz" October 1, 2020 - January 24, 2021, at the Jewish Museum, NY. Photo: Kris Graves

This exhibition, organized by artist Jonathan Horowitz, brings together more than 70 voices, ranging from an 18th century portraitist to contemporary artists commissioned for this exhibition, to draw connections between historical oppression and the cultural and political challenges we confront in the world today.

Originally scheduled to open in March 2020, We Fight to Build a Free World is an exhibition curated by Jonathan Horowitz, a New York-based artist who for three decades has made work that engages critically with politics and culture. Under his direction, the exhibition looks at how artists have historically responded to the rise of authoritarianism and xenophobia as well as racism, anti-Semitism, and other forms of bigotry. The exhibition also addresses issues surrounding immigration, assimilation, and cultural identity.

Conceived from a starting point in 2017 of addressing the resurgence of anti-Semitism, this exhibition uses a broader lens to look at oppression and bigotry. The relevance of this exhibition has become more acute as the country reels from numerous incidents of police brutality towards people of color and a reckoning with the history of systemic racism. In the organization of this project, Jonathan Horowitz has acted as curator, researcher, activist, and artist.

The exhibition’s title, We Fight to Build a Free World, is adapted from a painting by Ben Shahn, which will be on view.  The installation juxtaposes diverse works, making thematic connections across time and place, raising questions and fostering dialogue.

The exhibition is a project by artist Jonathan Horowitz, organized in consultation with Darsie Alexander, Susan & Elihu Rose Chief Curator, Shira Backer, Leon Levy Assistant Curator, and Ruth Beesch, Senior Deputy Director.
We Fight to Build a Free World: An Exhibition by Jonathan Horowitz is made possible by Toby Devan Lewis, the Martin and Rebecca Eisenberg Foundation, the Leon Levy Foundation, and other generous donors.
Additional support is provided through the Centennial Fund, the Peter Jay Sharp Fund, and the Barbara S. Horowitz Contemporary Art Fund.