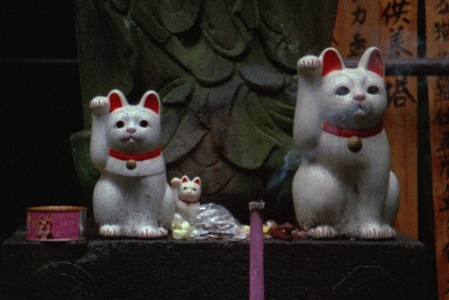 Driven by a desire to “capture life in the process of becoming history,” the enigmatic and influential French filmmaker Chris Marker travelled the globe and made a sprawling body of hybrid work that ruminates on the nature of memory and time. Of the several films he made in Japan (where, among the crowded drinking holes of Shinjuku’s “Golden Gai” district, there is a bar named after one of his early masterpieces), this singular essay film remains the late director’s greatest achievement. An unnamed woman narrates the poetic letters and philosophical reflections of an invisible world traveler accompanied by footage of Guinea-Bissau, Cape Verde, Iceland, Paris, San Francisco and, most significantly, Tokyo—a city whose people, streets, malls and temples inspire the traveler’s richest observations.

“One of the key nonfiction films of our time… difficult to describe and almost impossible to summarize.”
—Jonathan Rosenbaum, The Chicago Reader

Part of Tokyo Stories: Japan in the Global Imagination